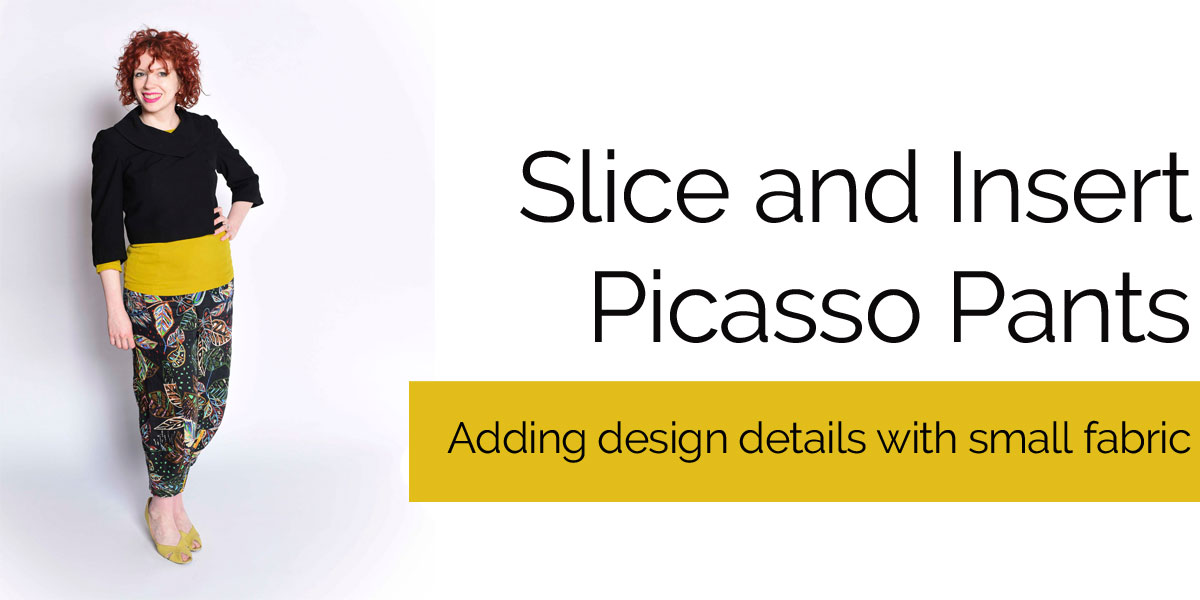 Last February we hosted an Open House to celebrate the launch of the 2019 Sew Confident! collection. Each guest received a goodie bag full of fabulous prizes, including some fun pre-cut Australian Aboriginal fabrics. The pre-cuts are 5" square, which is great for quilting but trickier to use if you are a garment sewist. Or is it? I love incorporating small pops of color as a design element within a larger garment. Sometimes I will use a small piece of fabric as an under collar or pieced along a front placket. For this project, I pieced the fabric together and sliced and inserted them into the lantern leg of my Picasso Pants. 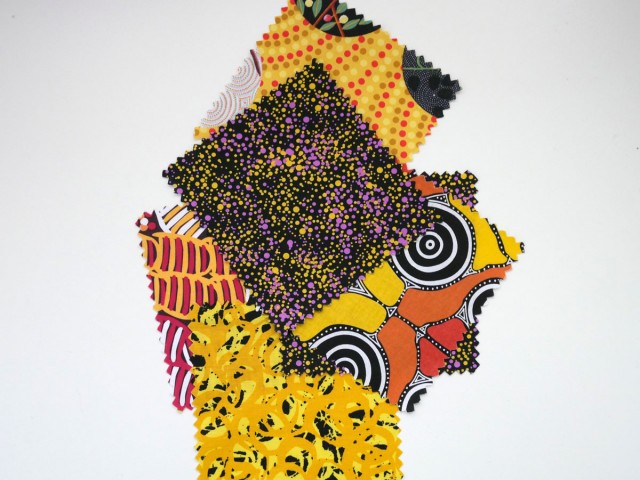 ​I made the Picasso Pants using our Jungle Leaves Linen fabric, which has wonderful colors on a black background. The yellows, oranges and blacks of the Australian pre-cut fabrics from M&S Textiles Australia coordinated well, but also pop when viewed against the black background. To begin, I measured the Lower Front and Back pieces and compared them to the pre-cuts. Luckily, two pre-cuts pieced together with a ¼" seam allowance were just the right length to fit into the pattern pieces. 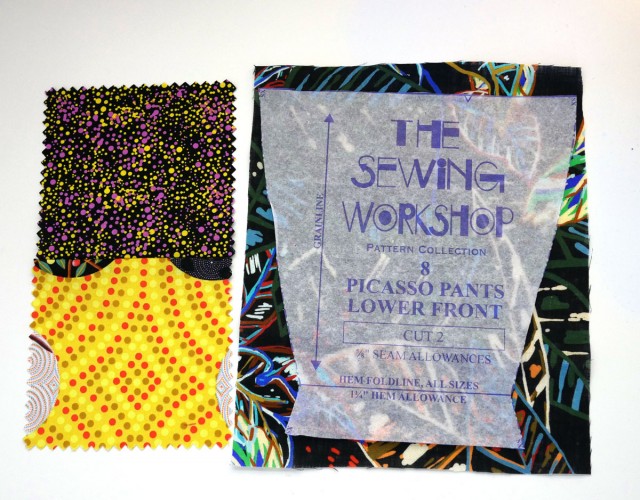 I stitched the pre-cuts fabrics together and cut them into ⅝" strips. Then, I cut the fabric for my Lower Front pattern piece in half. 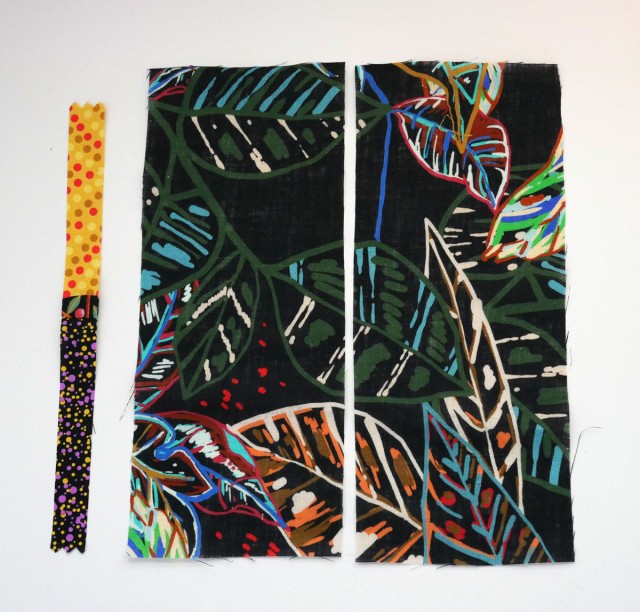 I stitched my pre-cut strip to the pattern fabric using a ⅛" seam allowance. 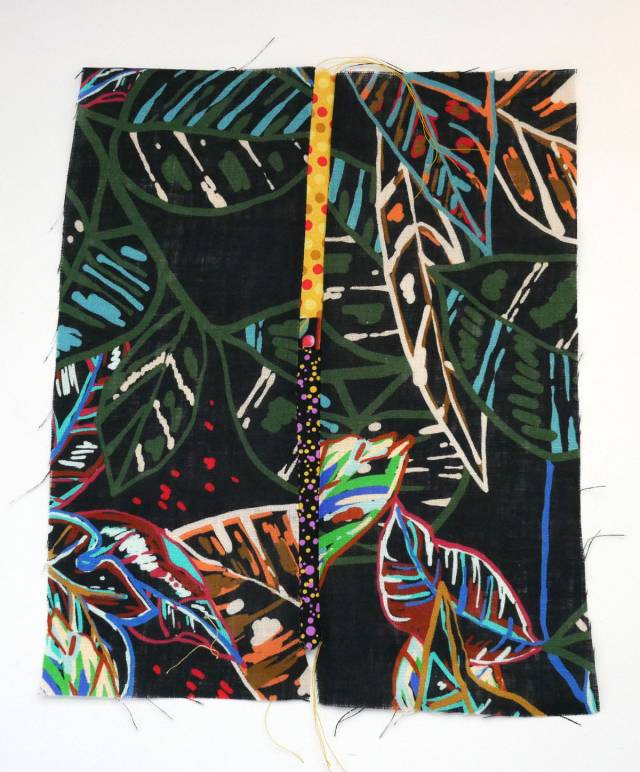 After I sliced and inserted my first piece in the middle of the fabric, I continued cutting the fabric. I did this completely at random, using my eye to decide where I thought the strips should go. After each slice, I would insert my pre-cut strip. I continued this process along for all the Lower Front and Back pieces. 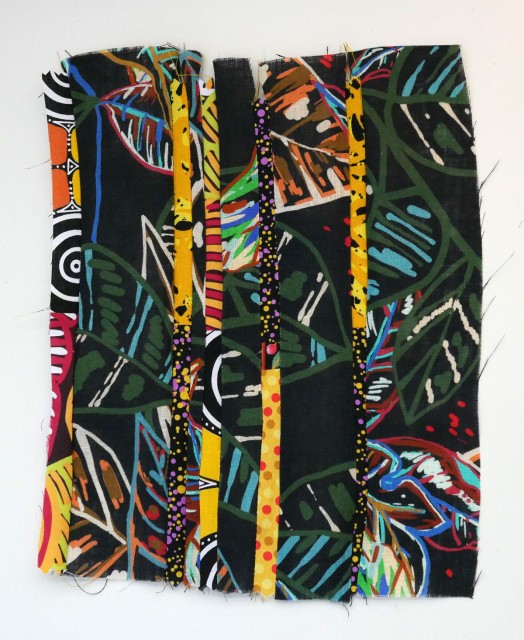 I love how the inserted strips not only add a punch of color, but they also accentuate the lantern shape of the bottom of the Picasso Pants! 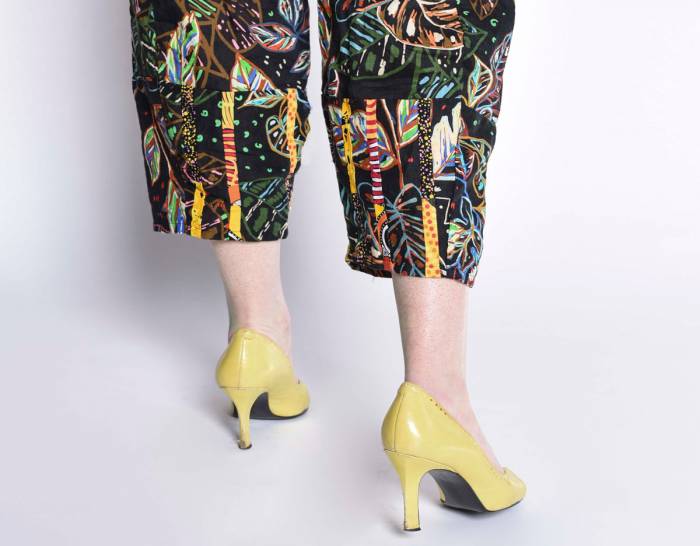 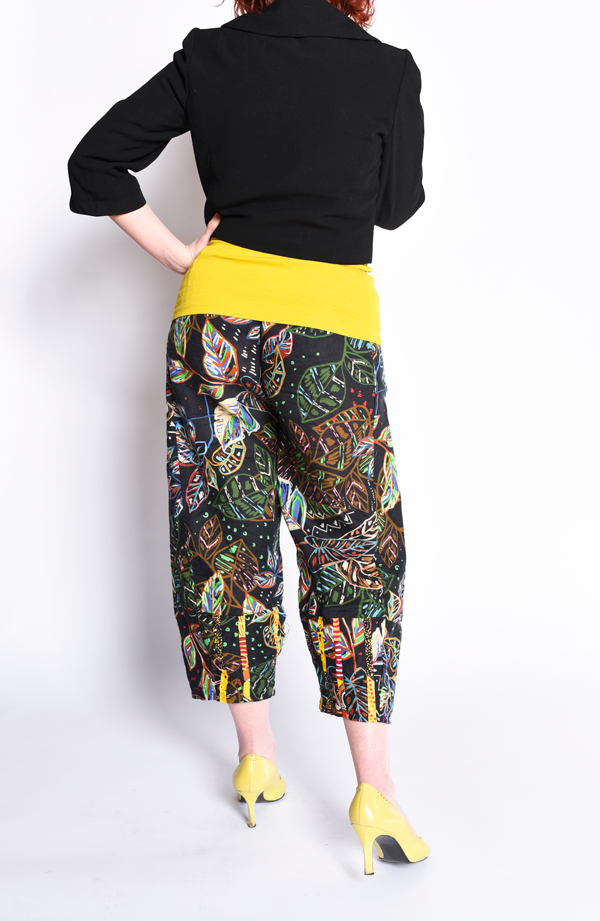 ​Check out our collection of these wonderful Australian Aboriginal designs. This line is special, not just because of the fun color and designs, but each print also comes with a story about the inspiration behind the design - you even get to learn about the designers themselves. It really personalizes what could otherwise be just a "pretty fabric" and brings a sense of connection into your project. 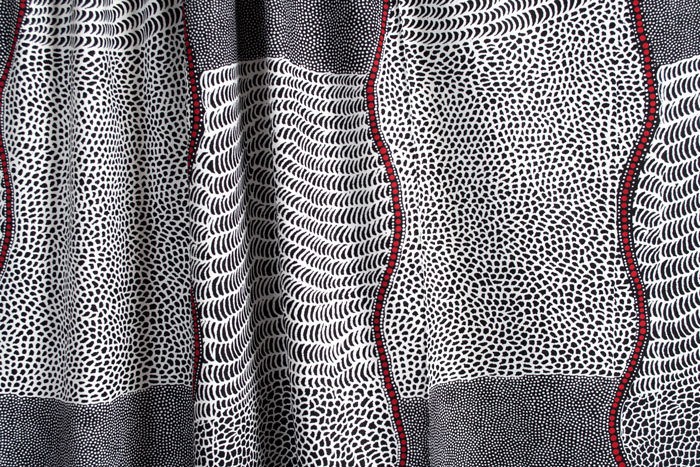 A lightweight cotton that features an Australian Aboriginal print inspired by bush onions, a commonly foraged food. In Aboriginal language an equivalent of bush onion is Merne Yalke. It grows on creek beds. When the grass of the plant dried out, Aboriginal people dug up the bush onions from the soil. They clean it and husk it and eat it. If the bulb is white inside, it can be eaten raw or cooked. It is hard when it is raw but soft when it is cooked.

Jane Hudson is a very good artist. She learned painting from her mother. Her dreaming is fire dreaming, bush onion dreaming etc. Her works are neat, bold and colorful. 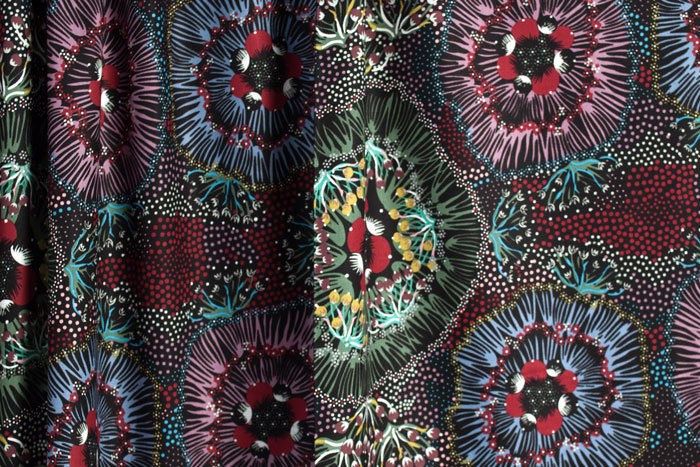 A lightweight cotton that features an Australian Aboriginal print inspired by the bush plum, a vital food source for the Aboriginal people. The Bush plum is a vital food source for the Aboriginal people and is frequently featured in the women's dreaming stories. The fruits are harvested by shaking the trees until they fall to the ground, but the fruits, although already quite sweet, need to be soaked in water to soften and plump them for eating. The Bush Plum tree flowers in the spring.

Aboriginal artworks are popular throughout the world and the only living ancient artworks. Its tradition goes back 50,000 years ago revealed by carbon dating of rock painting, cave painting etc. It is amazing that many of the artists do not have any formal education or training. Designed by Polly N. Wheeler. 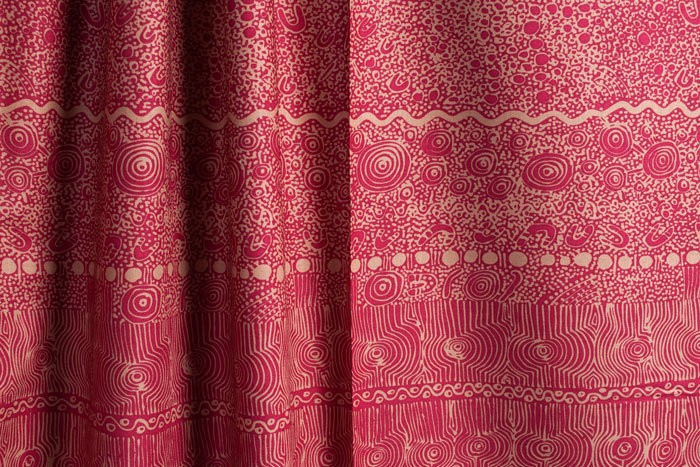 Australia is the place of landscapes. To Australian Aboriginal people, land is very close to their heart. According to 'Aboriginal Mythology', 'Dreamtime' is the time when forefathers sprung up from underneath the soil and started creating almost everything for what their future generations would require.

In this artwork, Stephen Pitjara depicted his land of Utopia with dots, lines and motifs representing the Dreamtime creation of seeds, trees, mountains, landscapes etc., which play a key role in the Australian fauna and flora, nature and spirituality and indigenous development. 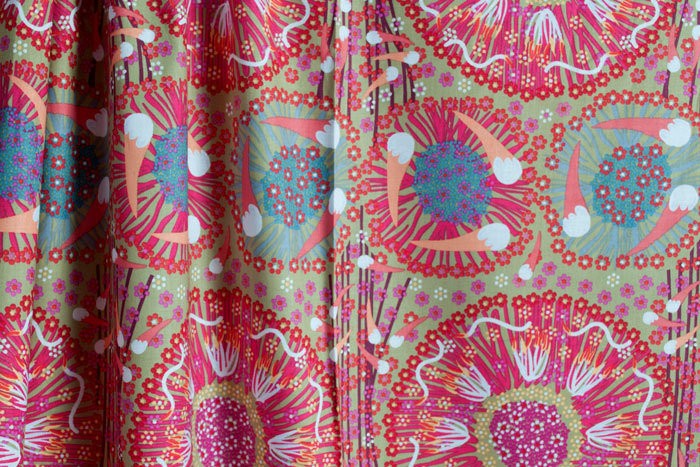 A lightweight cotton that features an Australian Aboriginal print inspired by bush plums and bananas. Both fruits were a mainstay of the Aboriginal diet. Bush plum is a small plum-like fruit grown abundantly in sub-tropical woodlands of the Northern Territory of Australia. The fruit has a high content of vitamin C. It is full of anti-oxidants, folic acid and iron. The flowers are small, creamy white, perfumed and borne along spikes in the leaf axils towards the end of branches. The fruit has been a traditional source of bush tucker and healing remedy for the indigenous people of Northern Territory for many years. Aboriginal people have lived in Australia for many thousands of years. One of the secrets to their success was their knowledge of nature and bush food. Bush banana is another commonly used fruit from tucker to medicine.

Laurel Tanels is a skillful and bold artist. She depicted both the bush fruits very neatly. Laurel's sense of color is excellent. Bush banana and plum & bush banana are enormously adored by most fabric lovers around the world. 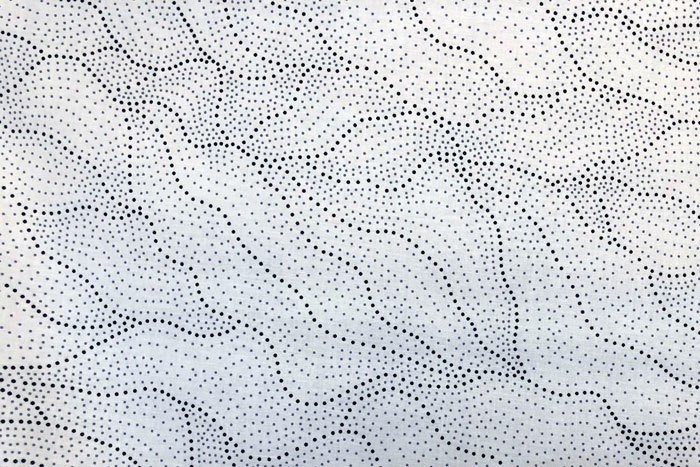 The Utopia region of Australia is the home to many Aboriginals covering over 3500 sq.km with the Sandover River in the vicinity. A few of them now live in the metro area of Alice Springs and others in the camping sites out in the bush. They prefer living close to the bush, taking care of their land (country). The two main languages spoken in this area are Alyawarr and Anmatyerre.

The name Utopia (Uturupa), means 'Big Sand Hill', a region in the northwest of Central Australia. It is an amalgamation of several large and small communities. There are only a few schools, grocery supply stores, hospitals etc. in the remote areas of Utopia. Alice Springs, the nearest town is the best place for one-stop shopping. Highways, including unsigned roads, mud roads to local communities are a rich source of red-dirt as seen in the central deserts of Australia. Often this bigger picture is referred to Sandhills by the Aboriginal artists.

Berwick St. Tunic Sew Along Part One: Getting Star...
A Fuchsia Faux Jumpsuit