​The neck binding is really the only part of the Zayn instructions that are radically different for the woven and the knit versions. I'm going to show the woven steps first. If you are making a knit, scroll down to that section.

WOVEN Step 23: Press your Neck Binding piece lengthwise with the wrong sides together. Before you start pinning, we recommend you prepare your neck binding. Start by laying the folded strip in a curve (with the folded edge on the outside) on a pressing surface. Then, preshape the strip by steaming the curved bias. This reduces some of the extra fullness along the raw edges, and allows the bias to lie flatter. 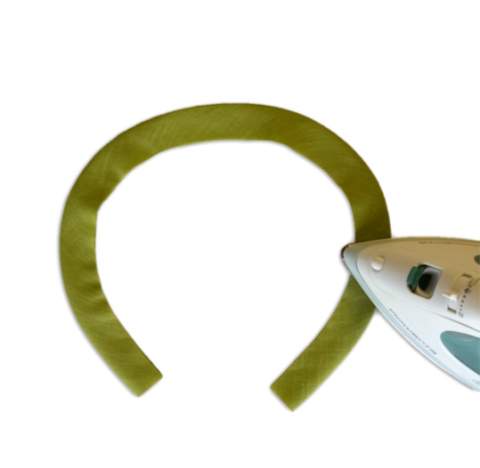 Then, in Step 24, with right sides together, pin the neck binding to the garment, matching raw edges. Note that the binding will extend past the ends of the center back. Align the left side of the presser foot with the outside fold of the binding and move the needle position to the right in order to sew 1/2 inch from the fold. If is more important to sew an even distance from the fold than to worry about the width of the seam allowance. Stitch seam. Trim seam allowance and trim the ends to a 1/4-inch. 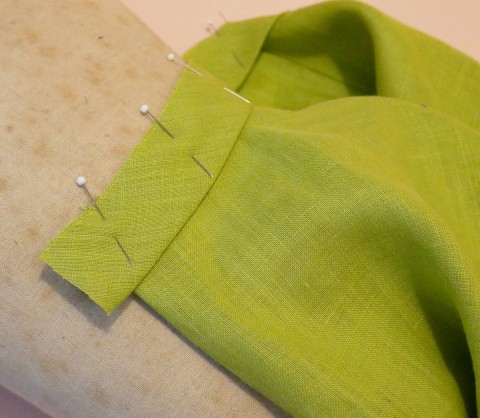 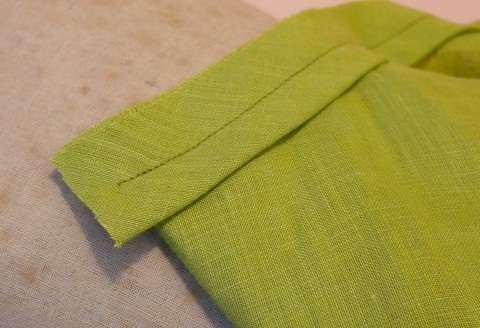 Place the neck opening over a tailor's ham and lightly press the binding and the seam allowance away from the garment. 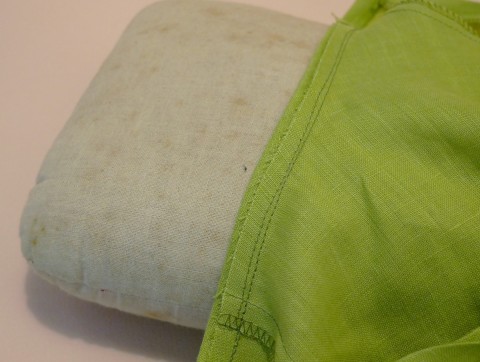 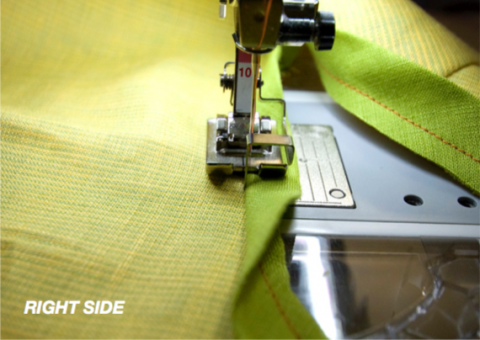 Fold the binding completely to the inside of the opening. Fold in the 1/4 inch overhand on each edge. Place the opening over a tailor's ham and lightly press the finished edge. 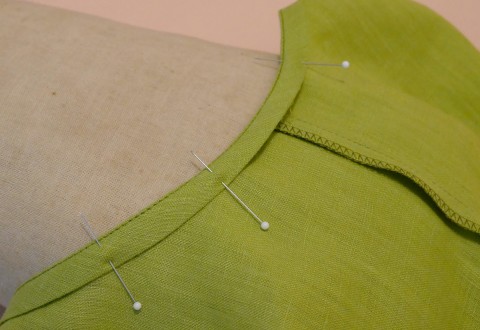 Hand baste along the neckline to secure the neckband. Use a contrasting thread that will be easy to see and remove later. 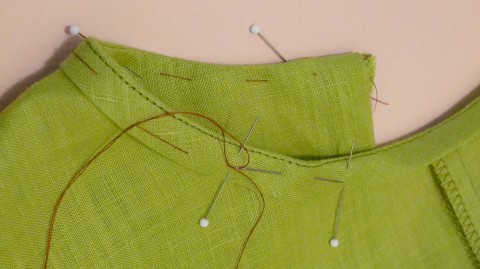 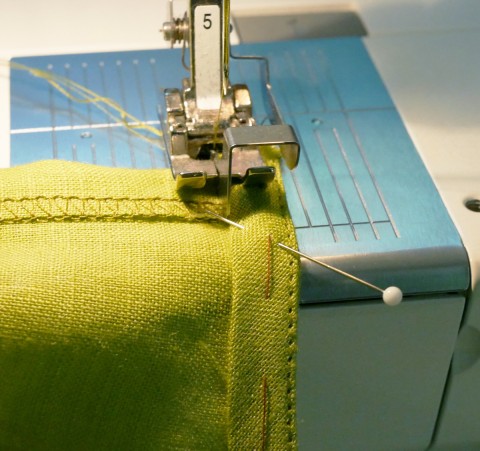 Turn your garment right side out, remove the basting stitch and lightly press. Stitch a hook and eye to binding edge at center back opening.

KNIT  I used a black knit for my neckline which resulted in terrible photos, so I'm going to be using some of our better technique photos for the next few steps.

Fuse a narrow stripe of Fusi-Web to the wrong side of one long edge of the neck binding. Start and stop a couple of inches from each end. Remove the paper covering to expose the glue line. Fold the binding in half lengthwise and fuse the edges together. Not shown: Mark a line 1/2 inch from the folded edge. 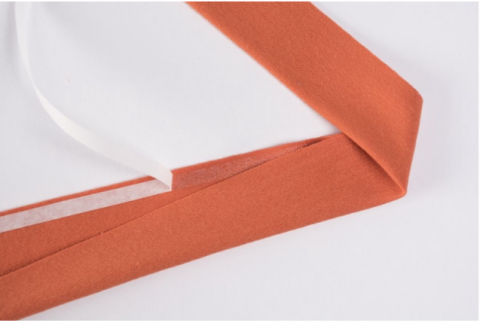 Open out the fold at each end of the binding. With right sides together, sew the ends together. Starting to sew short seams can be difficult, especially when using a sewing machine that also embroiders and therefore has a wide opening in the throat place. Placing a piece of paper under the seam (as shown below) while sewing eliminates this problem. Peel the paper away after sewing. 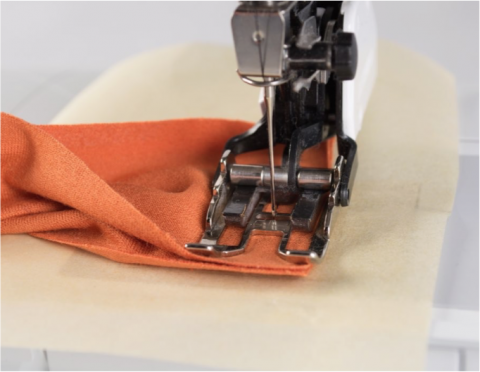 Refold the binding in half. Divide the folded binding into fourths. Fold the binding at the seam and mark the opposite end fold. Place a pin as a mark, or simply make a snip. Snips are a better option because pins can fall out of lightweight knits. 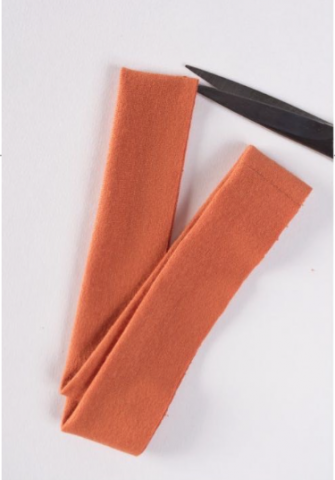 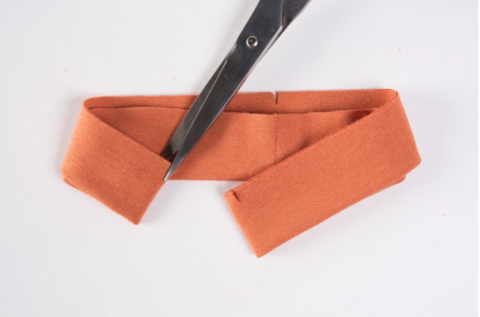 Divide the neck opening into fourths. Place the center front and center back on top of one another and pin or snip the upper folds (these will not necessarily be the shoulder seams. 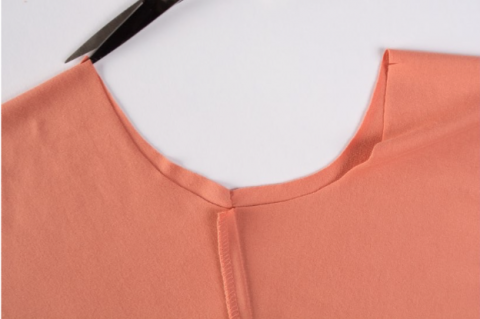 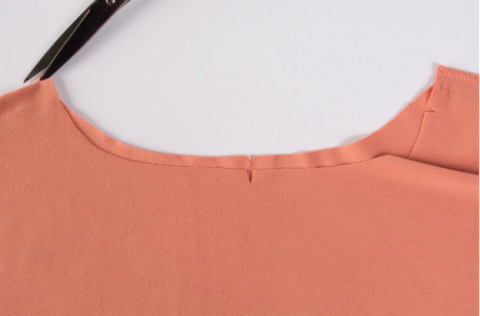 With right sides together, pin the folded binding to the neck opening, matching raw edges and each pin. You only need four pins. 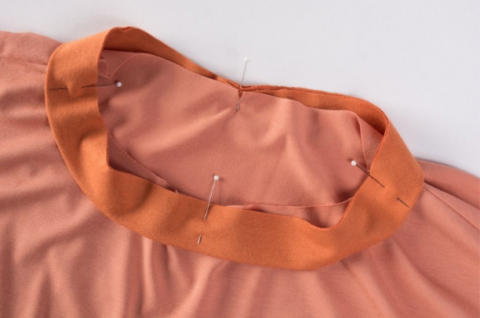 Starting at one pin, insert the needle on the marked 1/2 inch line that you made. Hold the pin and fabric with your right hand. Use your left hand to align the raw edges in between the pins. As you stretch the binding to fit the neck opening between each pin, stitch the binding to the neck along the 1/2 inch marked line. When you are finished sewing on the binding, finish the seam edge with a serger, if using one. Be very careful and sew slowly to make sure not to catch the garment underneath! 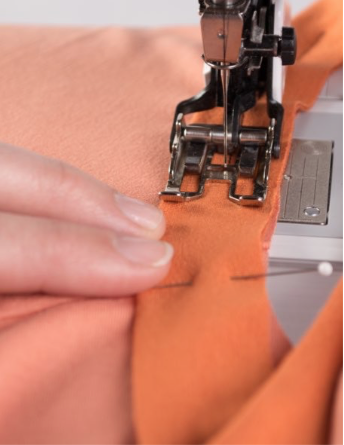 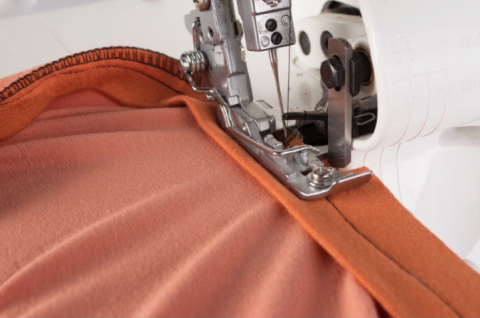 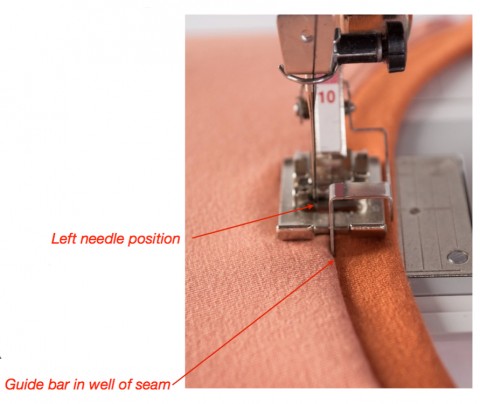 ​OK folks, in the next post we will attach the sleeves and then you will be done!