​Are you ready for the next phase of the Zayn Sew-Along? Remember, you can join any time – these posts won't be taken down, so even if you are just following along now, you can sew when it is over. Also, have you joined our Sew-Along Facebook Group? It is a great place to meet new online sewing friends and get help when you need it. And we would love to see photos of your Zayn progress, so don't be shy, post them on the group!

​Today we are working on what I think is the trickiest part of the pattern - attaching the drape. It isn't hard to do, but it does take some concentration. So beginning with Step 6, finish both side seams of Upper Left Front and Upper Left Back separately. Then sew the Upper Left Front to the Upper Left Back at the side seam. Easy, right? Yes, with one important exception. You need to be sure that your dots are marked clearly, hence the tailor tacks. While we start sewing at the edge of the armhole, we stop stitching at the dot. So, when you are pinning your pieces together, make sure you are lining up your dots, as I did below.

Now, start stitching from the edge of the armhole, but when you get to your mark, go no further! You can see below how my stitching does not extend beyond my tailor tack. We need that seam allowance for a future step, so it is important to be accurate. 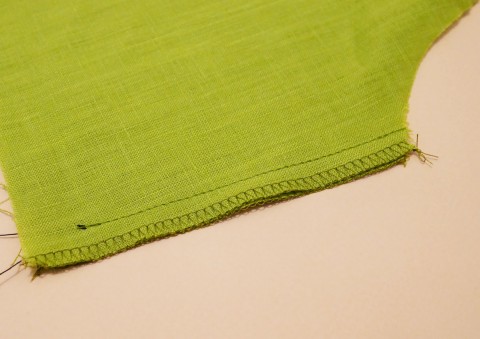 When you are finished stitching, press the seam allowance open. 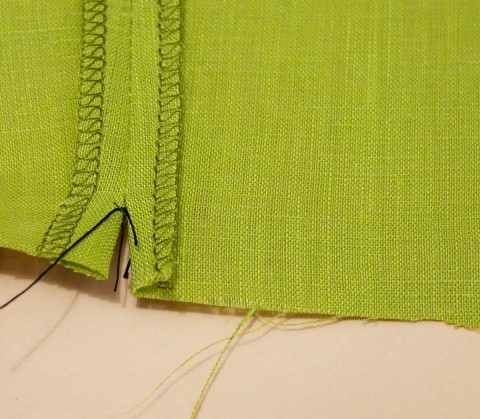 Step 7 asks us to attach the Front Drape to the Upper Left Front. It is very important that your markings are still clear, because we are going to do a lot of dot matching.  Below, you can see that I placed my Front Drape right side up, and I am placing my Upper Left Front right side down. Notice on the right side of the picture the side seam that we just stitched.

Start at the left corner and place your dots right on top of each other. Pin. 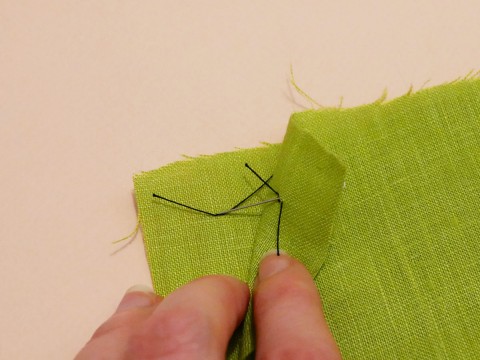 Then go over to the marking on the side seam (that we stitched in step 6). That will match with the "center" dot on the front drape. Once those are together, finish pinning between the two dots. 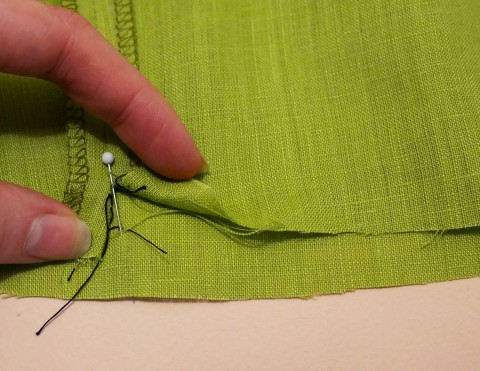 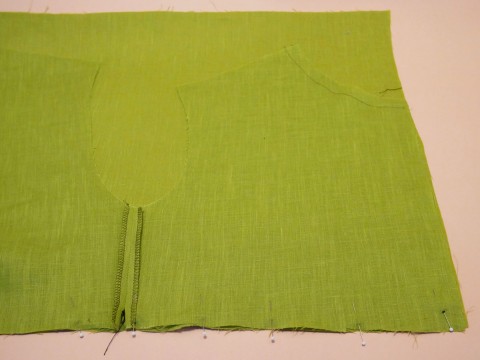 You will notice that the instructions* tell you to open out the seam allowance before you stitch to the center dot, but in fact you should sew over the seam allowance, as it shows in the illustration. I also am showing this in the image below. Start stitching at the edge of the garment and stop, once again, directly on that dot in the seam allowance. Because you are stopping at the dot, you will have a section of the Front Drape that is unstitched. That is exactly right. Leave it for now, we will come back to it later.

*The updated instructions are now in your account. To receive an updated file, download the new version now. 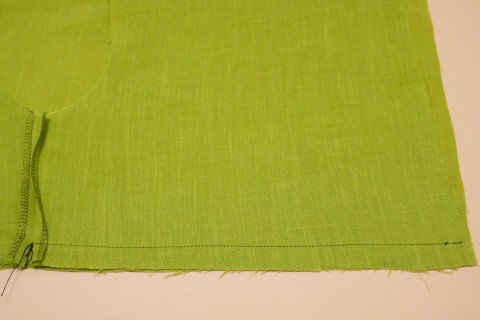 In Step 8 we are attaching the Back Drape to the Upper Left Back. Below you can see that I placed my Back Drape right side up and my Upper Left Back right side down on top of it. Do you see that fold that is over behind the Upper Left Front? That is the unstitched section of the Front Drape that I have folded out of the way. As we did in Step 7, you will match your outer edge, corner dots and pin. Then match the Back Drape center dot to the seam allowance dot. Pin and stitch from the outer edge to the dot in the seam allowance. Once again, you will have a section of the back drape that is unstitched. 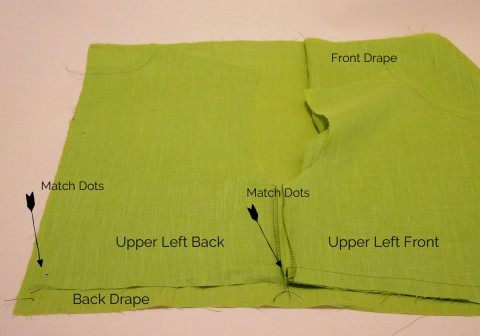 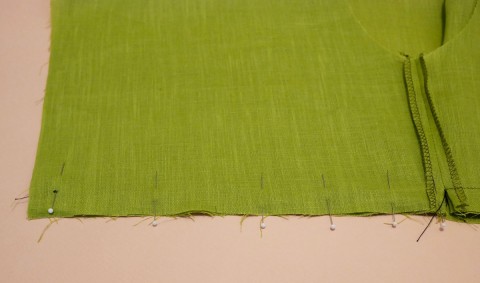 ​Now you've created a left waistline seam in both the front and the back. The unstitched seam, shown in the image below will create the drape seam. To help keep your garment aligned, notice that the Upper Left Front and Upper Left Back (connected at the side seam) are placed with wrong sides up. The Front Drape and Back Drape (shown right sides up) are connected to create the waistline seam to the Upper Left pattern pieces. The drape seam edges are still to be stitched from the center dot to the outer edge. 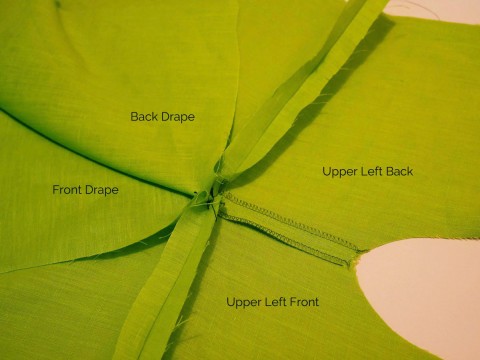 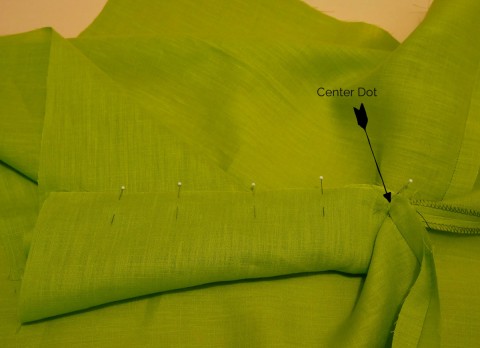 Once pinned, start stitching at the dot and stop at the outer edge. When you are finished, it should like the image below.

Hooray we did it! The drape is officially attached to the garment! Before we go celebrate, let's finish the seams. Step 10 tells us to finish the waist drape seam together starting at the center front. This will be a two-layer finish. 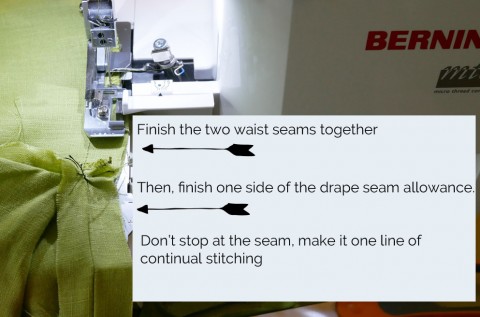 Above, I am serging my waist drape seam together, but at the center side seam dot I have opened the seam allowance. Once you get to the side seam you will finish only one seam allowance of the front drape seam. It is important that you don't stop serging at the dot. This should be treated like one continuous seam finish. See image below for a detailed shot of the transition. 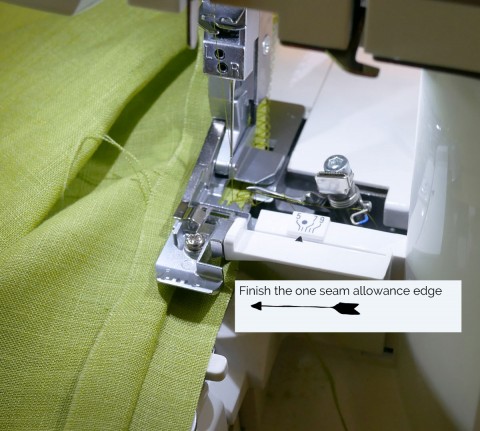 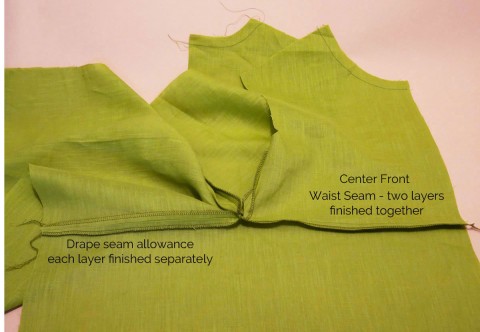